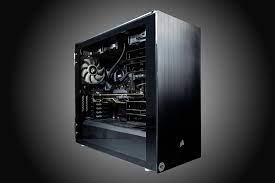 There is no bad gaming PC, only gamers who don’t know how to optimize their computer to play better games. Let’s refer to the components that PCbuilder.net shares right on the site to increase gaming performance on your PC right away.

To have the best CPU choice, you should compare the performance of the CPU lines and then decide which CPU to choose, to compare the 2 CPUs you refer here. However, you need to pay attention to whether the socket of the CPU matches the socket of the Mainboard. Currently, Intel chips use 3 socket types including LGA2011, LGA1150 and LGA1151. Of these 3 sockets, LGA1151 and LGA 2011 are the 2 most popular sockets by users.

As for AMD chips, AM3+ is considered a popular socket for many CPU segments from cheap 2-core to 8-core models. However, the introduction of the RYZEN CPU is considered a big turning point for AMD in the competition with Intel’s Core i7.

The large screen helps the displayed image to be very wide and pleasant. But with some games you need to observe the entire screen at the same time, the big screen is not an advantage. With other games, you only focus on the center of the screen and ignore the edges.

The most optimal screen size is 24-27 inches for a sitting distance in front of the screen from 0.5 to 1m. Large screens such as 32 – 34 inches appear on the market more and more, but the price is still very 2-3 times higher than the 24-inch screen. Gamer should choose a reasonable screen size, it helps to experience the game better and save a large amount of money.

RAM plays an important role, because it is responsible for helping users access the game as well as performs many tasks at the same time. So if you want to follow the instructions to build a PC, you need to make sure you have enough RAM to use. Currently, RAM with 8GB capacity will help you get a great experience with games, as well as perform multiple tasks on the computer at the same time.

Like the battlefields of PUBG, Call of Duty or Battle Field… offline games also require a large amount of RAM to be able to download environmental elements and surrounding scenes. With a 2021 gaming computer configuration, perhaps 8GB of RAM is the minimum number. But if you have more conditions, 16GB of RAM is still a standard amount of RAM to help you experience smoother games.

It can be said that the GPU is the core of gaming. And GPU always requires drivers to always be the latest version to keep it working faster and better. Therefore, regularly checking and installing GPU drivers is always a top priority that you should do if you want to get the best game experience. Recently Nvidia has launched the new Ampere cards (RTX 3000 series), among which we find: 3060 Ti, 3070, 3080 and 3090, but the range will be extended downwards with new different models shortly and, in the meantime.